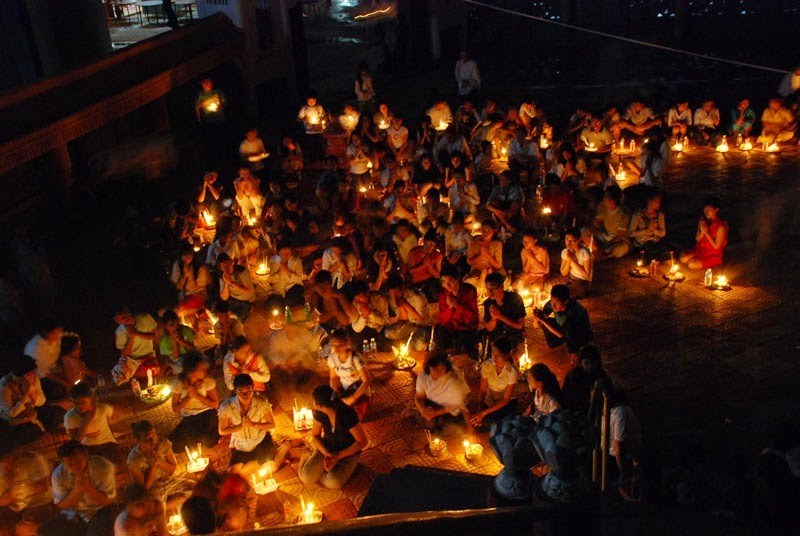 When is Pchum Ben?

Pchum Ben day is Friday 27th September this year, but it’s very common for businesses to shut for an extended period of time around the holiday. With many bars and restaurants shut at the weekend, and some even taking the entire week off, we’ve put together a list of all venues advertising they’ll be open as normal from Tuesday 24th (Constitution Day) September straight through to Tuesday 1st of October,

What is Pchum Ben?

Pchum Ben is much more than simply the time when all your favourite drinking spots inconveniently close for a week. It is a unique and very Cambodian festival. The celebration dates back to the Angkorian era when the dominant religion was Animism. Since then it has incorporated touches of of influence from both Animism and Buddhism as a festival which reflects the Khmer tradition of respect for your ancestors.

The first 14 days of the festival are known as the observed celebration or Kan Ben. The 15th and final day is called Pchum Ben day and is the time where monks are given gifts and candles. The monks then recite a prayer and it is on this night that the village comes together for the night of celebration. After they have of course, dealt with all those ravenous ghosts.

The festival is in part, a time to feed hungry ghosts. Four types of ghost are at play here. The kind that eats pus and blood, the forever hot burning ghost, and the Pakrakteaktopak Chivi, who can receive food through the monks over the festival period. The other ghosts must reduce their level of sin before they can receive food.

Now you understand the festival, remember that is a very important time for Khmer culture so be patient that our beloved little city comes to a temporary stand still.

Staying in the city and need some tips on where you can still frequent? We’ve rounded up a bunch of places advertising that they’ll be open.

You’re past the padding, so let’s dive in to the list…

21 Bar
Almost creeping into the restaurant category due to their weekly steak delights, 21 is open and kicks off the open bar establishments due to having ‘bar’ in it’s official name…
Street 21, Tonlé Bassac

All Sports Bar
Always featured on our sporting guides, this bar pulls out the stops to show as much sport as they can. We’ve dropped a request for some obscure fixtures before and been catered for – highly recommend!
Street 172

Blue Dog Bar & Restaurant
Holding the fort in BKK1, Blue Dog is open and offering up that huge enticing list of cocktails! See you on the dance floor.
Street 51, BKK1

Cloud
Bar and cultural space. Not only will they be open, but they’re celebrating 4,000 Facebook likes with a 4,000 riel party on Friday the 27th. Punch, shots and beer for only a dollar. Bargain.
Street 9, Tonlé Bassac

The Deck
Russian Market based hotspot with weekly pub quizzes on Tuesdays and open mic nights on Thursdays – business as usual during the holidays!
Street 135, TTP

Eighty8 Backpackers
The stylish pod hostel up near Wat Phnom shall be showing all sports and live rugby world cup games. Open from 7am until midnight, customers are also invited to use their pool.
Street 88

Embargo
Varied opening hours for the holidays, 5pm–midnight on Friday 27th and 3–10pm on Saturday 28th. It’ll likely be sold out by then, but if you get the chance to try a Big Drip beer from them, we’d highly recommend it…
Street 51

The Hangout
Only opening on Friday 27th, but worth mentioning due to the special event they have planned. From 9pm until 2am Indigo and Chase will be taking over the bar for a special DJ extravaganza. Free entry, $1 beer, $3 cocktails and even the chance to try HypeLab’s ‘Big Drip’ white beer that had sold out from their recent pop up event.
Street 476, TTP

Hops Craft Beer Garden
Be whisked away to a German beer garden while the city celebrates the Khmer holiday. Hops are staying open to serve up their wondrous array of alcoholic creations.
Street 228

The Outpost
Aptly named, this hotel/bar is a live sports gem more southern in the city than most tourists would ever discover. Should you stumble upon it you can delight on their coverage of the rugby world cup, AFL grand final and even get a smashing Sunday Roast!
Street 13, Khan Dangkao

La Petanque
Open 4pm-1am, the Russian Market late night haven will be open for beers and bowls (the French type, of course). Plus, on Friday 27th they’ve got SoundAdvice DJing for party vibes.
TTP Lane

Pontoon
This nightclub giant of the city never sleeps, and is open all week keeping the party going until the small hours!
Street 51

Space Hair
Looking for a haircut by day? How about a delicious cocktail by night and some great chatter from the friendly hosts. Space hair’s got it all!
St 136

Wings & Beers
A chicken wing restaurant with beers, or a beer bar with chicken wings? We’ve opted to stick this one in as the latter, rejoice in it being open and drink merrily until the munchies for wings kick in.
Street 135

Scrolled through the bars without feeling enamoured? How about a slice of tasty, tasty restaurants?

Azure Bar & Grill
Casual fine dining just a short walk from Russian Market. The market itself may come to a standstill, but good food will not.
Street 123, TTP

Burgershack
The beloved burgers from the ‘shack will be available. They’ve posted to let us know it’ll be open on the 27th and 28th and available for delivery via EGETS.
Street 51, BKK1

La. Chronique
For Pchum Ben day (the 27th), they’ll be closing early at 6.30pm but that’s totally reasonable since they open at 6.30am! Indulge in the sophisticated ambience but don’t loiter too late in the evening.
Street 135, TTP

Curry Pot
Forever tempting our tastebuds, this little restaurant has a large menu with very reasonable prices – and best yet, it’ll be open during Pchum Ben.
Street 454, TTP

Haveli Indian Cuisine
Offering a 15% discount on all food items between September 24th and October 1st, and a 3 for 2 deal on glasses of wine, Haveli will be open as usual from 10am to 11pm every day.
Street 308, Tonle Bassac

Khéma (Both locations)
Both the Pasteur and ‘La Poste’ restaurants are open as usual, offering a decadent deli dining experience.
Street 51, and Street 98

Malis
Have you tried Malis restaurant yet? It’s highly regarded and an absolute gem of a date spot – even better, they’re open all festival.
Norodom Boulevard, Corner of Street 308

Mr Shawarma 51
Rejoice as your fast food needs are met from Mr Shawarma, open as normal from 4pm until 5am for the drunken clubbing revellers.
Street 51

NagaWorld
All restaurants in NagaWorld are open as normal, with their NABA theatre (on level 2) also open during the festivities.
Samdech Techo Hun Sen Park

Namaste Indian Restaurant(s)
The Phnom Penh Trip Advisor champion(s) (#1 AND #2 ranking at time of writing). Indian food worth staying in the city for. Past writeup here.
Street 63, Bkk1 and Street 308, Tonlé Bassac

Restaurant la Provence
Open for business, but note that it’ll close daily between 2pm and 5pm. Conform to regular meal times and you’ll be grand.
Street 118

Sacred Lotus Café
Open 8am to 8pm, this “plant based café” will continue to offer healthy options that are good for the planet, the soul and the tastebuds.
Street 440, TTP

Terrazza
Sometimes you just need that pizza fix, and they’re on YourPhnomPenh for deliveries, too. Grab a slice of the action…(yeah, pun intended).
Street 282

Topaz Restaurant
In business for over 20 years, with a whopping Facebook following of well over half a million people, this Phnom Penh stalwart is open as normal. Indulge in fine French dining at your leisure.
Norodom Boulevard

The Box Office
The Sunday roasts aren’t on, but the Box Office will be open all the same. Catch some free live comedy on Friday 27th from the Comedy in Cambodia team.
Street 244

The Flicks Community Theatre
Movie lovers rejoice! You’ll still be able to amble along to The Flicks and part with a mere $4 to enjoy a day’s worth of movies. Business as usual.
Street 95

The Nutcracker
Artisan nut cheeses, available for home delivery as always, these vegan alternatives taste as good as the planet feels about them.
Order via their facebook page

Piano Lessons Phnom Penh
Perhaps now is the time to brush up on your piano skills, and fortunately you can as this business is open as usual during Pchum Ben. Based in BKK1 with house calls available.
More information via: www.pianolessonsphnompenh.com

Soul Asia Cambodia
Want to relax? This massage parlour is staying open to help folk unwind during the holidays.
Street 63

Business owner? Person in the know? Help us grow our list by messaging our Facebook page with any extra information on venues open entirely for Pchum Ben via: www.facebook.com/whatsonphnompenh

Continue Reading
You may also like...
Related Topics:pchum ben